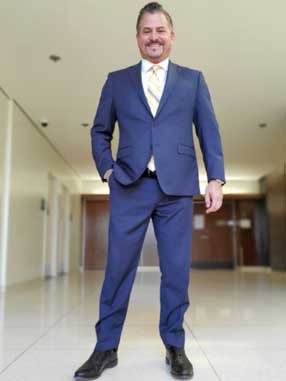 David E. Wohl has been successfully defending clients facing criminal charges for more than twenty-five years. Mr. Wohl uses his vast experience to help our clients get the best possible outcome in their case.

Mr. Wohl has represented thousands of clients who were facing crimes including but not limited to DUI cases, murder charges, juvenile crimes, restraining orders, DMV matters, civil matters, CACI hearings and juvenile dependency matters. No matter what type of case he is handling, Mr. Wohl always defends his clients vigorously throughout the entire legal process.

“It is my goal that every client I represent ends up very satisfied with the outcome of their case, whether all charges have been reduced or dismissed,” Mr. Wohl said. “The one thing that I always make a point to do is to assure my clients that I will get them the best possible result in their case and will never stop fighting for their rights.”

If you are looking for an attorney with experience in court, Mr. Wohl is the lawyer to turn to. Throughout his career, he has had upwards of sixty-five jury trials including,  hundreds of bench trials. His success in court is due to an extensive knowledge of the law and an aggressive approach in the defense of his clients.

“David Wohl has a combination of skill and experience that is unparalleled in the arena of Criminal Law in Southern California,” Wallin & Klarich Senior Partner Paul Wallin said. “Anyone facing criminal charges would be lucky to have David on their side.”

Mr. Wohl is called upon on a regular basis to act as a legal analyst on criminal matters and political issues for Fox News. He frequently discusses current events on “Kelly’s Court” and “America’s News Headquarters.”

Admitted to Practice in the Following Courts:

“After I was arrested for DUI on a US Army base I found myself with a date in Federal Court, completely unaware of what kid of trouble I was facing. My blood alcohol level was .12 and I was prepared for the worst! That’s when I called Mr. Wohl for help. Attorney David E. Wohl fought hard for me and got the charge reduced. In the end all I had to do is pay a $100 fine—no probation, and no other requirements! I was thrilled!”

“After my teenage sons were allegedly involved in an incident of serious horseplay I got a notice from the state that my oldest son was being placed on the Central Child Abuse Index. I was outraged as this listing could ruin his life even before he’s done with high school.

I quickly called attorney David Wohl, who is a well respected expert in these cases. He worked very hard on the front end of the case, finally convincing the attorney for Child Protective services that this was not a case of abuse. CPS then agreed and took my son off the CACI–without even the need for a hearing. My family is thrilled with the outcome!”

“For many years I had legal guardianship over my sister’s daughter. Her behavior eventually began to deteriorate. The next thing I knew she fled my home and began to make allegations of abuse and neglect to Child Protective Services. CPS then filed a petition to remove her from my home, alleging that I had been abusive to this young teen—a total lie!

Worse yet, Social workers then filed a petition with the juvenile court alleging that my own three children were at risk! I hired Legal Eagle David Wohl after I learned he has more than 25 years experience handling juvenile cases of this kind. David worked hard from the beginning and not long after our first appearance on the case all charges were dismissed—I was thrilled!”

“One night last year I made the mistake of driving after I had been drinking. I crashed my car on the 405 freeway and ended up seriously injuring one of my best friends, who was riding in the passenger seat. Next thing I knew I was in jail, charged with two felonies. Attorney David Wohl not only helped me get released from jail, but he worked tirelessly on my case. Despite the DA wanting me to plead guilty to a felony charge, David convinced them to reduce the charges to misdemeanors. The probation officer asked the Judge to sentence me to more than 9 months in jail, but Mr. Wohl successfully argued that I should receive no more than 4 days—and the Judge agreed!

I highly recommend David Wohl to anyone who finds themselves in the position I was in!”

“I was falsely charged with felonies for elder abuse, embezzlement, identity theft and grand theft. I was facing four years in prison. David E. Wohl kept me informed and was easily contacted whenever I had a question or concern. David never gave up. His persistence makes him an excellent lawyer; one who not only stands by you and with you, but also fights on your behalf – and I mean FIGHTS! I most highly recommend David E. Wohl to anyone who needs an outstanding lawyer and representation in legal or court matters. Thank you again David E. Wohl!”

“I am ecstatic with the results and very happy to have your help. I am recommending you to anyone I meet who needs a lawyer for criminal cases. Plus I liked that you got us out of court early considering how full it was. That made me feel special! I’ll be doing my community service and then going to the next court date like the judge said.

Thank you again so much David. It has been a real pleasure working with you and lifting the burden off my back.”

“I was halfway through my three years of probation for my DUI conviction when I found out that to keep my job and become a U.S. citizen, I needed to clear my record. Attorney David E. Wohl filed a motion with the court to expunge my conviction and to terminate probation. I just found out the motion was granted! I’m thrilled that I hired Mr. Wohl to help me out of this mess!”

“I was charged with possession for sales of drugs, cultivation and possession of more than $25,000 in drug proceeds. Attorney David E. Wohl worked tirelessly on my case from the day he got it. In the end I will end up with nothing more than a misdemeanor on my record—probation and no jail time! I’m really happy I went with Mr. Wohl!”

“I was really upset and stressed after being charged with theft from a retailer several months ago. From the day I retained Mr. Wohl to help me,he really did a great job putting me at ease. When we went to court, he arranged to have the theft charge dismissed! I’m thrilled with my outcome and I would recommend David to anyone who’s charged with a crime!”

“Soon after I was charged with drunk driving, I learned that my blood alcohol level was .08. I thought I would have no choice but to plead guilty to DUI with all the extreme consequences that go with it. Attorney David E. Wohl went to court for me and worked hard to get my charges reduced to a simple reckless driving. I was thrilled with the outcome of my case, and I’d recommend Mr. Wohl to anyone facing charges of drunk driving.”

“I was facing 45 years to life after being charged with child molestation and continuous sexual abuse of a child. Attorney David Wohl investigated my case and worked hard for months until he finally got the D.A. to agree to an eight-year sentence. I will be out of custody in plenty of time to see my son grow up and to be a big part of his life. I’m very happy that I retained David Wohl to help me in my time of need.”

“I recently found myself falsely accused of physical and sexual abuse of my own daughter. Child protective services detained her and filed two separate petitions against me and asked the court to find those allegations true! Having no other option I hired attorney David E. Wohl. Mr. Wohl has been specializing in these cases for more than 25 years. He demanded a trial, cross examined my daughter and then filed a motion to dismiss all charges. Last week the Judge did just that. All charges of sexual and physical abuse—charges that if found true could have ruined my life—were dismissed by the Judge! Life saver!”

Dave Wohl is tenacious and compassionate. A great pair of qualities for an attorney. Dave helped us prevail on a case that was intense, to say the least. Can’t say enough good things about the man and this firm.